As a long-standing tradition, which got more and more popular in the 16th century, many great Dutch masters have celebrated the Dutch traditional winters. Well known are of course the winters by Hendrik Avercamp or by Pieter Bueghel.
Recognizable by the many skaters on the fast frozen waterways. And, from the 17th century onwards, with the iconic ‘Koek en Zopie’ stands on the ice. It was an ideal way for people to mingle with one and another and feel free. A place where the rich and the poor would, the young and the old and the big families or freshly courting couples would meet and enjoy their time off.

In the collection of the Liquid Sky Gallery several traditional winter scene’s can be found. Such as the very bright ‘winters day near a ruin’ which Johannes Hoppenbrouwers depicted in his own characteristic spherical style. It can clearly be seen in that painting that Hoppenbrouwers was one of the top students of Andreas Schelfhout, who also idealized his winter scene’s with great romantic lighting and details. Take for example the ruin in the background of the work by Hoppenbrouwers. It is quite likely that this ruin is somewhat idealized and would probably not have been standing at the depicted location.
It does however greatly contribute to the romantic view that life is perishable and that human is merely ‘passing through’ in this widely set up landscape. 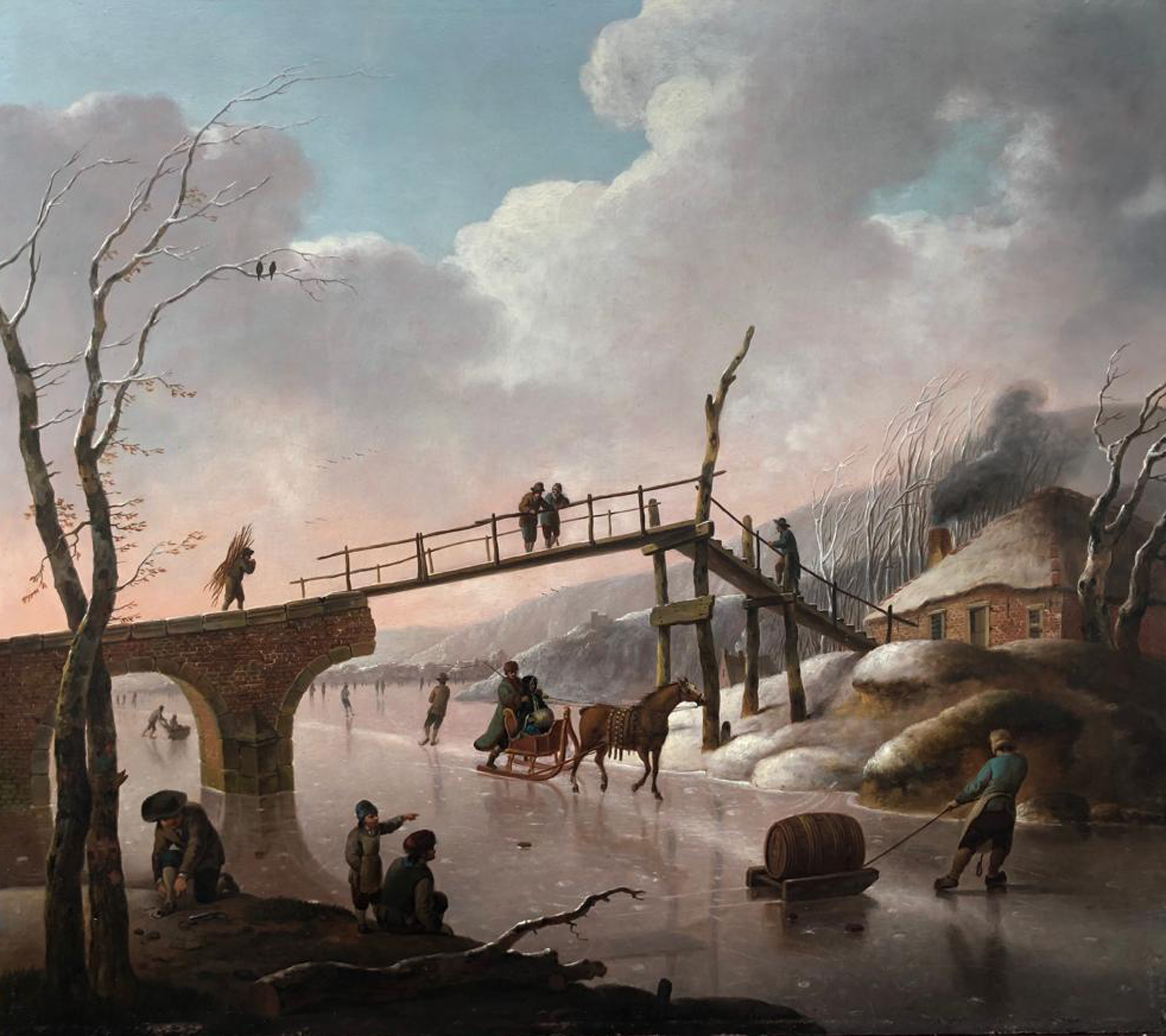 On the other hand, the painting by Hendrik Willem Schweickhardt shows us that the winters are also functional. Both fore entertainment, as can be seen by the many skaters joining the ice, as very functional.
It is truly creating an extra pathway to get to your location. Illustrated by the horse drawn carriage and the proprietor who is transporting a barrel of liquor, for the much needed relaxation after an intensive day of skating.
Especially in the 17th century horse drawn carriages as these where a way to show of one’s wealth. Carefully crafted and hand painted, some carriages where more of an artwork than transportation.

Because the average citizen was able to move quickly in a cheap manner in wintertime, the narrative element of the ice also plays a major role in this tradition. In the summers, a horse was needed to cover longer distances quickly. Something which not everybody could afford. On the ice, however, a few well-sharpened pieces of metal were enough to cover good distances. That was immediately a lot more adventurous.
This narrative element is strongly reflected in the works of Charles Leickert. For example in his work ‘Snow in the air!’. The people on the ice and even buildings are painted with anecdotal detail. Such as the open window hatch at the house on the left, or the figures working at the ice, with their horse with a pull sled. Even the lone skater on the right seems to carry an adventurous story with him.
Not to mention the threat of snow that will irrevocably be released on the landscape. It may take several hours, but the snow will start to fall. It is precisely that trusted certainty that makes the ancient Dutch winters so traditional. 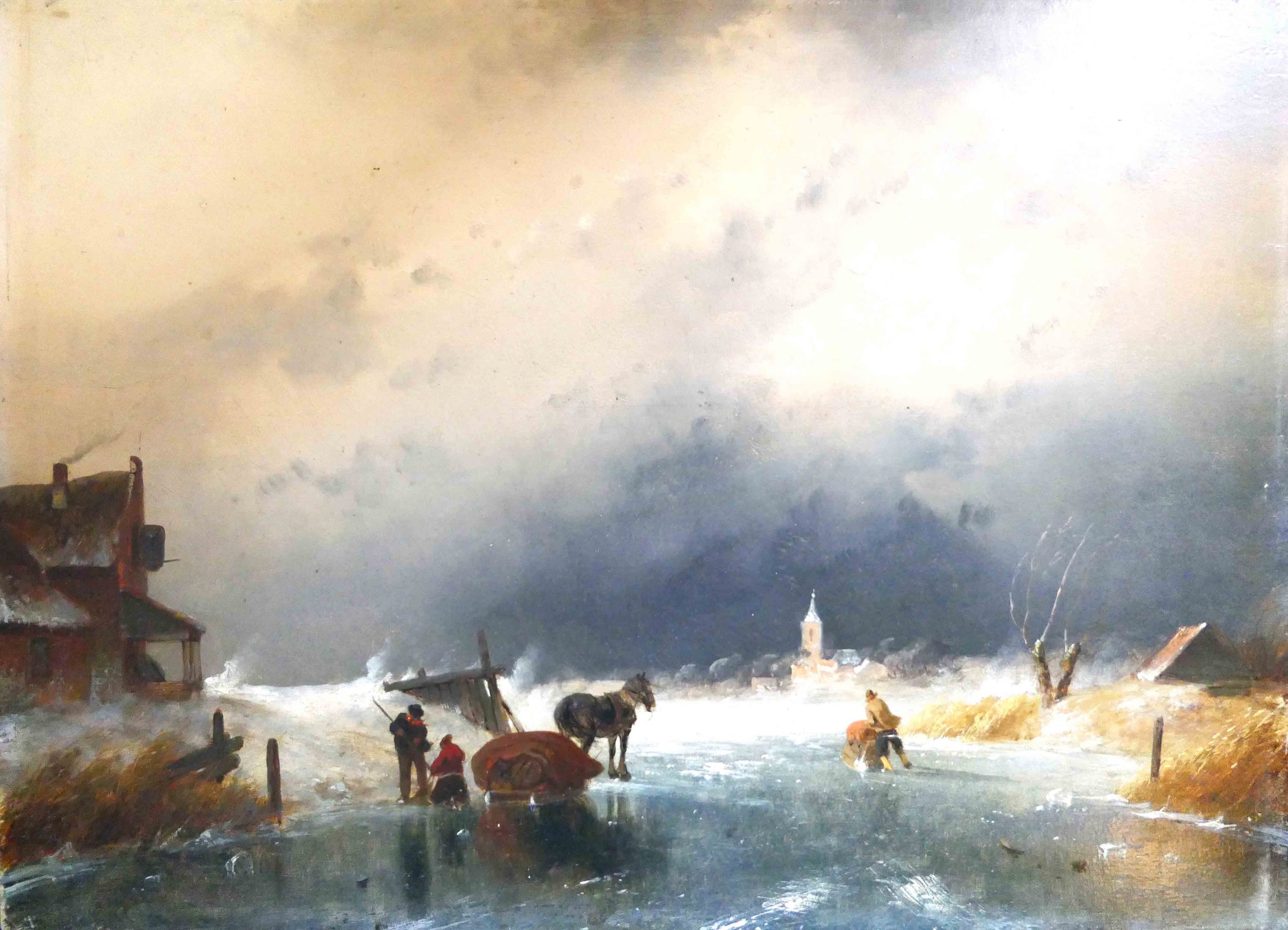