THE CITY VIEWS OF THE NETHERLANDS

The term ‘cityscape’ or 'city view' only became fashionable around 1800, before that the term ‘konterfeitsel’ was used, which loosely translated means "portrait". Not that cityscapes were not painted in the 17th century, but the cities depicted from a great distance were classified as landscapes and the more zoomed-in works were known as "a little street". Such as, of course, the famous "Little Street of Vermeer". Before the 17th century, very few cityscapes were actually made. The attention in those days was never really focused on the city itself as being the main point of attention.

Another well-known 'konterfeitsel' is the painting of the ‘Goude Bocht’ in the ‘Herengracht’ by Gerrit Berckheyde. This painting, of which 4 versions exist in oil paint, gives a very true-to-life image of this well-known Amsterdam canal around 1671-1672. These paintings are of great topographical value nowadays, especially since quite a bit of work was done on the canals at that time.
Frederik van Rossum du Chattel also made such topographical pieces. Frederik was also called ‘the painter of the Vecht’ because he worked in Vreeland and it’s broader surrounding for much of his career. Many of the works he made are most likely true-to-life representations of the surroundings of Vreeland, but not easily traceable because quite often the depicted farmhouses were not specific enough to be traceable, or so much alike that it was hard to tell. Despite the fact that the work depicted here is much more specific and fully elaborated, the exact location has unfortunately not been found to this day. 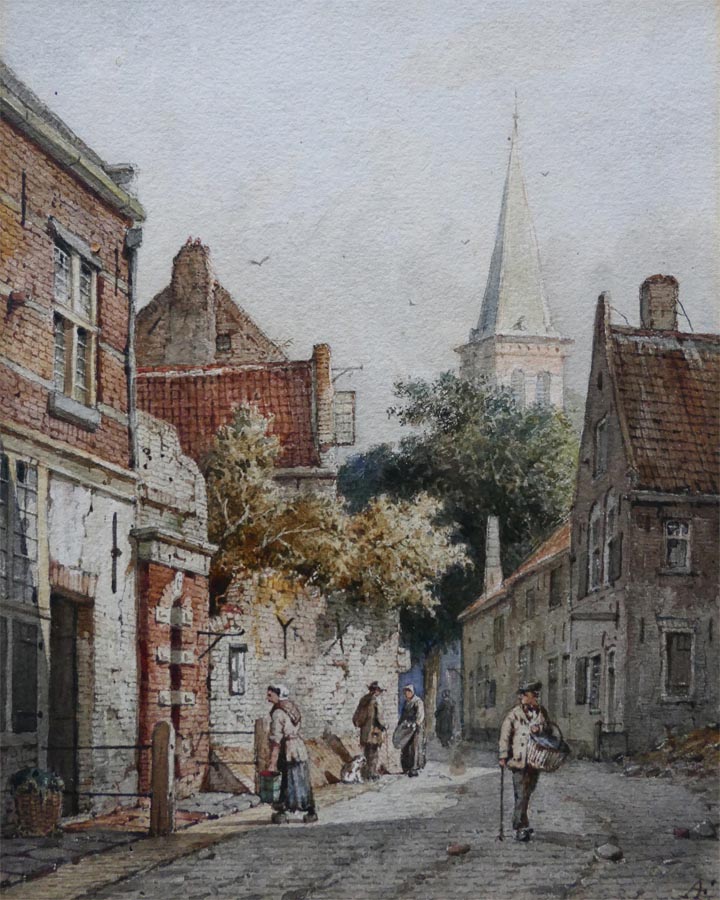 The term "cityscape" may imply that the depicted city is actually just one city. However, that is often not true. Even as far back as the 17th century, many cityscapes were imagined or pieced together rather than based on their actual location. For example, Berckheyde's work is known to have painted a completely built-up street wall in one of the four versions described earlier, while one of those canal houses depicted was only built in 1689 (at least 17 years after the painting was created). Some painters, however, were even less concerned with topographical correctness. Jan van der Heyden, for example, once painted a painting of an Amsterdam canal scene, with the tower of a church in the Zeeland town of Veere in the background.
Adrianus Eversen was also a painter of imaginative cityscapes. However, he was not interested in accurately depicting the situation, it was more about the historical beauty, exactly the right lighting, or the peace that can often be found in his cityscapes. In this summerly work on the right, small details, such as the open window, are mainly added for the beauty and the anecdotal details. Whether or not the window was really open, or actually existed, is irrelevant. Certainly not since the entire cityscape probably never even existed like this.